The most complete cave lion skeleton on the Iberian Peninsula has been recovered at Arrikrutz cave (Oñati, Gipuzkoa). 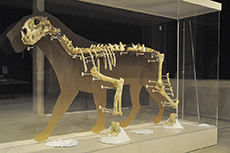 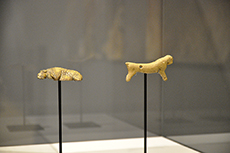 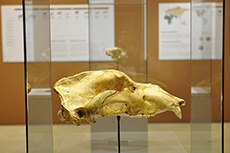 Although today we associate lions with the African savannah, during the Pleistocene they also lived in Eurasia and North America. The oldest lion fossils in Europe are seven hundred thousand years old. These Eurasian lions, bigger than present-day lions, belonged to the species known as “cave lion” (Panthera spelaea) and occupied different ecological niches during both glacial and inter-glacial periods.

Our ancestors lived alongside these large felidae and drew or engraved them on the walls of many caves and represented them in small statuettes. Thanks to these images we know that either the males did not have a mane at all or they had a very small one.

We do not know the cause of their extinction but their disappearance could be related to the climate change which took place at the end of the last ice age and hunting by humans.

The Arrikrutz lion skeleton is currently the most complete on the Iberian Peninsula. It was discovered by Iñaki Zubeldia in 1966, and studied by Jesús Altuna. It belonged to an adult individual which died in the cave. It has been estimated to have been 1-1.2 m tall to the withers, weighing about 250 kg. Despite its large size, superior to current males, it is not one of the biggest; there were cave lions weighing more than 300 kg.

All the activities (information in spanish).

Moreover, guided tours are also available for groups by prior reservation: stm_erreserbak@donostia.eus / 943 48 15 61